What city are we in again? 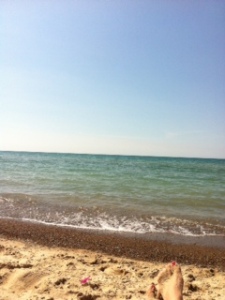 This year, I have traveled a lot. There have been some trips for work, some for play and roughly a zillion associated with our move.  I have spent so much time in airports that I actually have opinions about where you can find the best snack options (SFO) or how the cartoonishly surly barista at the JFK Starbucks actually makes a fabulous cup of coffee. I am not a nervous traveler, I find it enjoyable.  When I was growing up, we used to get dressed up to fly on planes.  Air travel was a different animal then. The staff was attractive and courtly and the food and booze were free.  Now they may be attractive and even courtly, but that doesn’t seem to be a requirement for the job and absolutely nothing is free.

It doesn’t seem like people dress up for travel anymore, particularly the early flights that we have been taking to maximize time at our destinations.  People roll out of bed and head to the airport.  Some even walk around the airport with those funny U-shaped neck pillows draped over their shoulders, like hemorrhoid donuts for their ears. You half expect to see them dragging their comforter behind them.  There is something so unself-conscious about the way people behave in airports. Somehow the experience of travel becomes so personal that a level of decorum that we typically reserve for public situations falls away.  Rarely do we head to our local grocery store with our pillow and pajamas despite the fact we may be sleepy.

Years ago a performance artist put himself in a cage at the zoo and people watched him, sleep, eat, brush his teeth. I can’t remember about the bathroom but maybe they watched that as well.  It was a wildly successful exhibit. I love being in airports because it is a little bit like that.  People’s public faces kind of fall away and they behave as if they were at home.  They lounge, they eat, they play with their children, even when they appear to be trying to get work done they look a little more at ease then they do in an office.

Even though I think it is a little strange to wear your pajamas on an airplane, or walk around with your pillow as if at any moment you may be overwhelmed with the need for a nap, I love watching people just do their thing in an airport. There is something comforting about how similar we all are.  I may not want to start my day with a large curry filled burrito, as my seatmate did earlier in the week, but I admire his lack of concern for potential gastric distress.  I love the “wasn’t me” expression on the face of a passenger when the stranger next to them is snoring with gusto. Or the two women behind us who shared intimate details of their lives with each other over the course of a 4 hour flight.  They covered topics from back injuries, dating, Costa Rican sailors, shuttered New York clubs and sushi, a friendship started because they had randomly been assigned 32E and 32F.

I think there is a sweetness about the fact that on airplanes people sleep next to strangers comfortably.  There is something trusting and very human about looking over at someone you have never seen before with their eyes closed and their mouth open.  I know lots of people think that air travel is nerve racking or expensive and incredibly un-glamorous. I understand their point, but I love what an equalizer it is. I love how people get in airports and just become travelers.  One may be a wealthy businessman and the other a struggling student, but they are both just trying to get to Nashville, Chicago, Tampa, or wherever.  To do that though, some of them just need a portable pillow and a spicy burrito for their journey…